Food makes up a big part of any culture. Recipes are passed down through the generations, made time and time again. As a result, these foods become part of a community’s cultural heritage. Trying local cuisine when you visit a new city or country is one of the best ways of experiencing and finding out more about local traditions and history.

Valencia has a variety of delicious local foods. We have listed some of our favourites below that you should definitely try while living in Valencia! 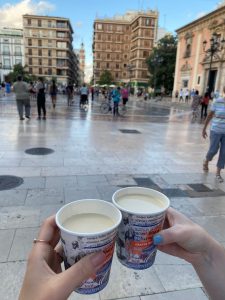 Horchata is a sweet, nutty and refreshing traditional drink. Served cold, it is a perfect cooler on a hot Valencian day. It looks like milk but it is actually made from tiger nuts (tigernuts), water, and sugar. Tiger nuts are small tubers that originate from Egypt and were introduced to Valencia by Arabs in the 8th century. Tiger nut milk is similar in taste to almond milk. Some say you either love it or hate it. Not only horchata is naturally vegan and gluten-free but it is also rich in nutrients and vitamins.

A traditional way to enjoy horchata is to have it with a farton – a long soft sponge cake covered with a sugar glaze. You can also dip it into the horchata for a bite full of flavour. There are many places to try a good glass of horchata as it is sold in most cafeterias around Valencia but a traditional shop where you can enjoy a Horchata and fartons is called a Horchatería . So if you want to feel like a local, you should definitely plan your visit there. 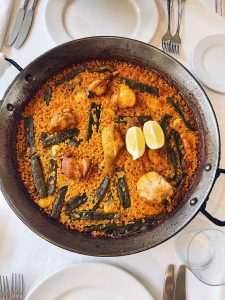 Valencia is the birthplace of this world-famous rice dish. When in the city this is one thing you definitely have to try! Traditional Valencian paella typically consists of rabbit, chicken, and garrafó (a type of local white bean). Other types of paella, including Seafood and vegetarian versions, are also widely available too. Another common type of paella served is black paella. This is made from squid ink which gives it its black colour. Paella is traditionally served in a large pan (like the image above) – perfect for sharing with your friends! ‘Paella’ is the Valencian word for the shallow pan it is traditionally cooked in and how it gets its name. 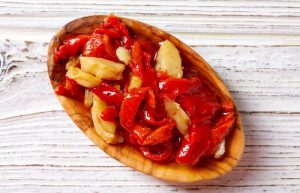 A tapas dish that originates in Valencia is esgarraet. This is strips of codfish, with roasted bell peppers, olive oil and garlic. Esgarraet is the Valencian name for ‘tearing’ and is where it gets its name, referring to teared cod fish and bell peppers. 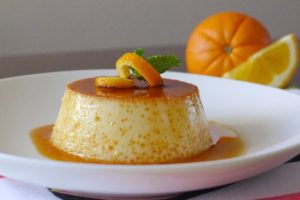 This is similar to creme caramel and is a typical cold Spanish dessert consisting of milk, sugar and eggs. It can come in a variety of flavours, including chocolate, orange, coffee or just traditional egg, and is topped with sweet caramel. 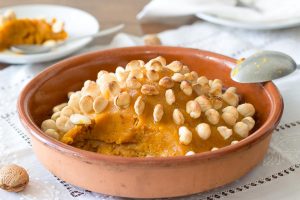 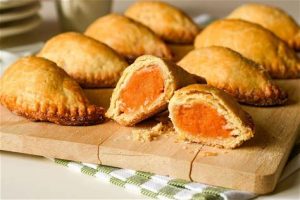 This is a Sweet Valencian empanada of Arab origin filled with boniato (a white sweet potato) or almonds. These are often served at Christmas time, as an after dinner treat. For those that follow a gluten-free diet, it is also common for the shell to be made with almond flour so you can still enjoy this traditional Christmas pastry. 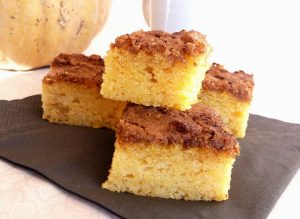 This is a type of cake that is perfect as an afternoon snack. It consists of eggs, milk, olive oil, sugar, flour, walnuts, lemon zest, and baking powder. Llanda means rectangular and is where the name of the cake comes from as it is baked in a rectangular container. Once baked cinnamon is often sprinkled on top and the cake is served cut into chunks. 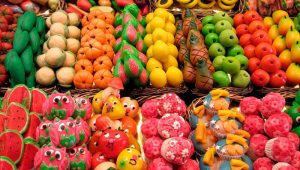 These are fruit-shaped marzipans, which are wrapped up and gifted to loved ones on the feast of Saint Denis of Paris (9th of October). Around this time, you can also find them shaped like fireworks, piulets and tronadors. 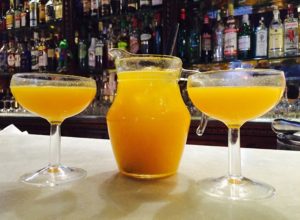 Last but not least – the traditional Valencian cocktail – Agua de Valencia – a combination of cava, gin, vodka, and (ideally freshly squeezed) orange juice. It is a sweet and refreshing cocktail, similar to a mimosa. The drink was invented in 1959 by Constante Gil, a bartender who was challenged by the Basque travellers to come up with something new containing cava. The drink quickly became popular among Basque travellers and in the 1960s gained wider popularity during Valencian evenings.